Let’s chat about one of my favorite gardening topics: compost. Seriously, how wonderful is it that you can take something you inevitably have if you cook or eat fresh produce – kitchen scraps – and instead of throwing them away, you can turn them into nutrient rich food for the next generation of fresh produce? And it’s a natural process. Depending on your level of patience, there is very little you have to do to go from trash to “black gold”.

One of the greatest things about compost is that it really only requires two things aside from the kitchen scraps – somewhere to keep the scraps as you collect them, and someplace to put the scraps to let them do their thing.

Husby and I have been apartment composting for nearly three years. The first six months or so were certainly a learning curve. Previously we had each been living in houses that had their own compost piles, but our apartment does not. Nor does it have a balcony where we could keep our own pile.

Theoretically, you might be able to keep a self contained compost in one of those large plastic storage bins in an apartment. At least that is what the internet will lead you to believe. But we were never able to get it to work. Compost does require some air circulation, and we always ended up with fruit flies in the compost. Just the simple act of opening the bin to add scraps released a gross fleet of little flies. Yuck.

After trying this method out for a couple months and making a couple tweaks to try and control our fruit fly population, we determined that trying to keep our self contained pile was just not an apartment dweller’s reality. We needed another option.  Our immediate solution, which allowed us to continue composting without interruption, was to collect our scraps and bring them out to husby’s family’s house, where his mom kept a compost pile. After a couple months we made connections with the neighborhood community garden, and made arrangements to add our scraps to their compost pile. For the past few years, every time we have a full container of kitchen scraps we bring them to the community garden. Since then, more and more community gardens have started in our neighborhood, so we, and our fellow apartment dwellers in midtown Detroit, have plenty of places to bring our kitchen scraps. 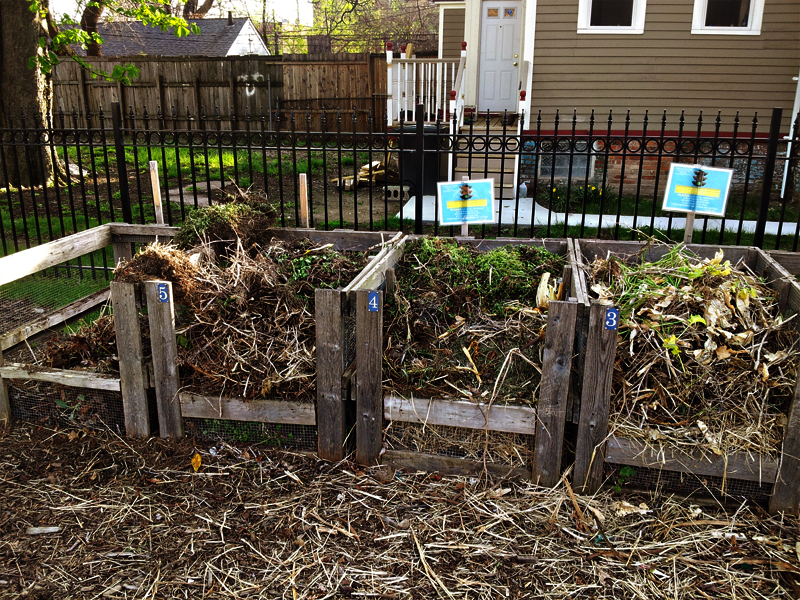 As far as how we keep our scraps in between trips to the compost pile, we certainly don’t use anything fancy. We just keep them in a plastic mixing bowl, and keep the bowl in the refrigerator to keep the smell down and the flies away.  No need for any specific composting container. No real need for a lid even.  We are easily able to keep scraps for two weeks between  taking out the compost.  In the summer we tend to empty our bowl more frequently, but that is mostly because we are using more fresh produce so we have more scraps in a shorter amount of time, and also because we are making frequent trips to the garden anyway to water or weed our garden plot.

So if you’re living in an apartment and want to compost, find yourself a local community garden and see if they will let you contribute to their pile. Then get yourself a bowl and start collecting.