I hope you all had a lovely long weekend. Between the Holiday and adjusting to the ever changing schedule that is medical residency, Tuesday’s post got away from me. I hope you didn’t miss my wrap up on light bulbs too much. 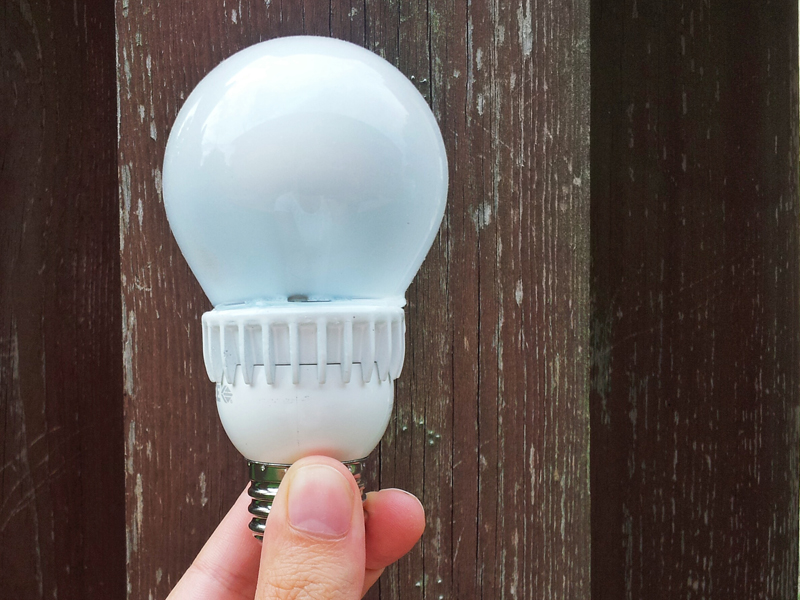 LED stands for Light Emitting Diode. LEDs are comprised of a semiconductor material and two leads. Basically what happens is that when the LED is connected to a circuit, a voltage is applied to the leads. This provides enough energy for electrons to jump across the band gap, and when they do, they release energy in the form of photons, or light. The color of light emitted by the LED is determined by the band gap in the semiconductor. If all this talk of semiconductors sounds vaguely familiar, it’s because it’s the same concept behind solar cells. Only in this case, the energy is coming from the wall rather than from the sun. LEDs are great as far as energy efficiency goes because they require a very small amount of electricity to produce light. They are also compact, robust, and have long lifetimes. LED light bulbs are made up of a collection of LEDs designed such that they emit a white, or slightly yellow light. Recently LED light bulbs have become increasingly available for home lighting, so let’s see how they compare to Incandescent and CFL light bulbs.

And bonus: LED light bulbs contain mostly recycle-able materials. Contact your local recycling provider to see if they can recycle your old bulbs. Although, you can probably wait 20 years  or so before you have to deal with that.

So the tally when comparing LEDs to CFLs and Incandescents is 3 pros, 2 cons, and 1 mixed review. Now let’s look at the long term cost.

And bonus: that same bulb will burn for another 13 years at that rate.

Pretty cheap when compared to the $96.84 it would cost to run the same light with a incandescent bulb, and it even beats out the $22.40 for the CFL.