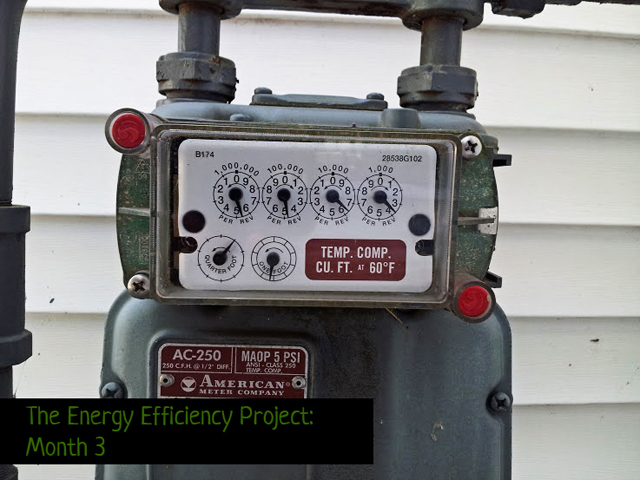 This month we continued to paint and started building some bookshelves.  We also hosted a first birthday party and started getting ready for our upcoming outdoor projects. We were splitting our time between the house and our apartment in the city during this month, so the house was using minimal maintenance energy while we weren’t in it. For example, the furnace was set just high enough to keep our pipes from freezing while out of the house, and really only the fridge was using electricity most of the time. So this month won’t be the best representation of our energy use, but will hopefully serve as a good reminder to put your house into low-energy-use mode when you’re gone for extended periods of time. As far as energy efficiency initiatives went we:

Over 28 days we used 301 KWH. Which comes out to an average of 10.75 KWH/day. Which is an expected decrease from the last billing period average of 14.2 KWH/day since we spent so much time out of the house.

We are part of the Alliant Energy Second Nature renewable energy program, at the 100% level. (In this program you can choose the amount of your energy use that you want to be matched in renewables, and we chose 100%.) So the cost of our electricity is $0.13 per KWH, for a total of $39.41.

We also used 73 Therms of natural gas heat energy. Which averages out to 2.6 Therms/day. That’s only 0.1 Therm less per day than the previous month! Even though much of the month the furnace was only heating the house to 55°, this month was much colder than the first two months of the year. Looking at this, I’m very glad that we made sure to turn down the thermostat every time we left the house, or we would have had a much higher gas bill. Also, looking at degree days this month compared to last month: 1383 vs. 1286. Our furnace was working hard this month!

The natural gas market fluctuates in Wisconsin, so there is not an easy dollar per Therm number to give you, but during this billing period we paid $60.09 for our gas use.

Our energy bill also provides these numbers for helpful comparison:

Degree Days this month: 1383 vs this month last year: 1342. Degree days are the number of degrees below 65° F in one day, all added together for the total 28 days of the billing period.

Want to previous months of the Energy Efficiency Project? Here is Month 1 and Month 2

This post contains affiliate links. Thanks for helping to support building earth!