Let me tell you a story. I’m not sure exactly what kind of story it is, but one might consider it a love story. A love story between a couple and the land. A story that will hopefully put many things into context.

When starting a story there is always a question of where exactly to begin. And while this one could start in June of 1984 at my birth, or Christmas of 1991, when I first learned about the Peace Corps, but I’m going to fast forward just a bit to fall of 2006.

Little baby 22-year-old Clare had just graduated from college and was about to move to Tanzania for a two-year stint with the Peace Corps. I had a duffle bag full of things I for sure thought I would need in the bush and a plan. I was going to teach secondary school in Tanzania for 2 years, come home, go to graduate school for aerospace engineering, and pursue work through NASA.

If I had to pinpoint a moment when that all changed, it would have probably been during a bus ride up a dirt road at six in the morning, out of the valley, into the mountains. I  watched the sun rise as fog settled into all the low nooks and crannies. Even now, 15 years later, I can perfectly envision it, and it’s just crack-your-heart-open beautiful. I mean, hand on my heart, the north eastern mountains in Tanzania are just the most beautiful place on the planet, and that’s all there is to it. Anyway, about that time I had just finished reading The Omnivore’s Dilemma by Michael Pollan, and, all eye rolling aside, it changed my life. There, winding my way through the mountains at the beginning of the day, with a new and active interest in soil farms and overwhelmed by the way the hills poked their heads through the fog below me, I knew my plans were changing course to keep me much closer to the ground.

I lived in a community of subsistence farmers who were experiencing the changing climate right then and there. They had been taught to adopt the industrialized agricultural practices of monocrops along with heavy fertilizer, pesticide, and herbicide use to grow corn and beans. Meanwhile the season of long and heavy rains was shifting. Rains were heavier and no longer as predictable as they had once been. At least where I was located, the farming was happening on the sides of mountains without tractors or other machinery. With each rainstorm the soil was washing down the mountain. With the use of more and more chemicals, the quality of the soil that remained was becoming poorer and poorer.

In the mountains of Tanzania, I planted my own garden and started a compost pile. I battled the neighbor’s chickens, who ate all my seedlings when I foolishly planted out of season. Coming from Minnesota, I expected seasons to be defined by temperature, leaves changing colors and falling from the trees, and daylight changes rather than rain patterns and when the chickens were no longer allowed to free range for planting time. I was finally able to grow my own broccolini and cilantro. I read my text book on permaculture cover to cover, and spent my free time daydreaming about working with the soil and the seasons to grow my own food. At the same time that I was beginning a relationship with my now husband, Neil, I was preparing to return to the U.S. and realizing that my decade long dream of being an astronaut was being pushed aside by a new and growing passion for creating healthy land and pursuing renewable energy sources.

I returned to Minnesota at the beginning of winter, but as soon as the weather permitted I built a large compost bin in my dad’s backyard. I planted rows of tomatoes, cucumbers, and potatoes. And I started looking at graduate programs in mechanical engineering.

Hitching my wagon to a partner pursuing a medical degree with a rural family medicine specialty led to a lot of moving around in the early days of our relationship. Without a yard of our own, we planted seeds in community gardens. I took classes on rain gardens, home solar projects, and a beekeeping course, and we dreamed of eventually owning an old farm and transitioning the land back to native prairie and woodlands. By the time we settled in Baraboo we were ready to plant an ambitious kitchen garden. We tore the lawn out  of the entire back yard, and replaced it with prairie grasses, wildflowers, all varieties of vegetables, and planted a native shade garden. On that little fifth of an acre, we grew towering sunflowers, and watched bunnies make their home in our grasses and hummingbirds and butterflies regularly flit through our flowers. We joined a local climate change action group and started learning about controlled burns and invasive plant management.

Isn’t it funny how looking back it seems like a perfectly logical build up to where we are now? And yet, on that late June day, when we closed on our property, after we finished unloading the moving truck and started poking around the land, we found ourselves completely overwhelmed by what we had gotten ourselves into. How had our friends and family members not stopped us from purchasing a 91-acre farmette? Who did they think we were? Who did we think we were? We had no idea what we were going to do with all this land. 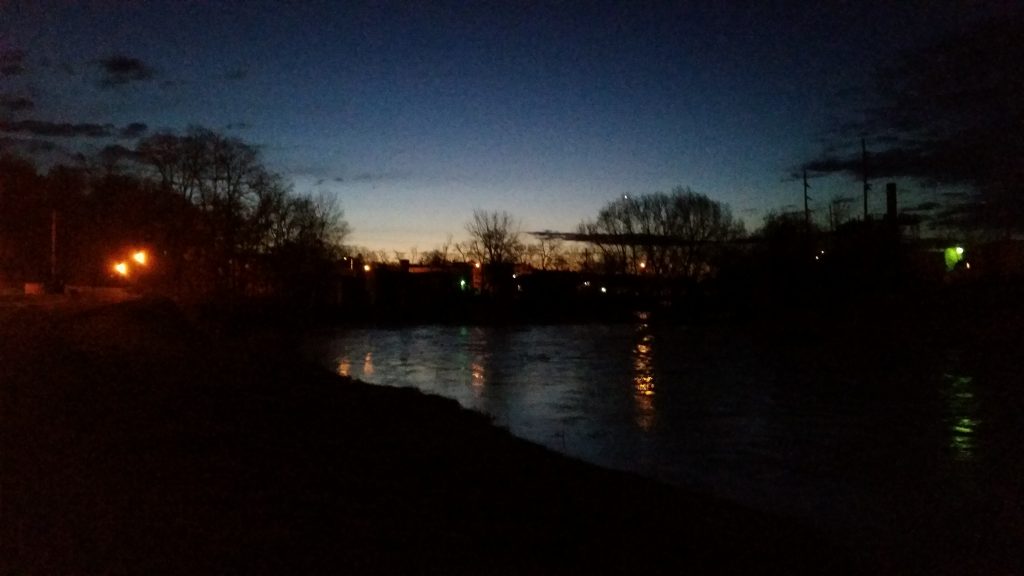 Let us remember, in the wake of 45 pulling out of the Paris Agreement, that ultimately, it is on us to act.

Make the choices in your everyday life that use less fossil fuels, more sustainable materials and manufacturing practices, and conserve the beautiful Earth we have. Make the choice to support companies that are doing the same. Vote with your dollars, and when the time comes, vote with your vote.

In a few months we’ll be moving again. Our third move in as many years. With at least one more on the near horizon after this one. Just another 80 miles down the road. Slightly north, slightly west. We’ll say goodbye to our little town, our little garden, our little house. And make a new home. Just like we have in the past, numerous times. Bringing mostly the same stuff with us, and also a few new plants. And we’ll try to put down new roots. And we’ll try to build more earth. And we’ll try to take care. Because this is all we have.

I didn’t necessarily intend to take a 3 month break from this place. It just happened. Life moved along, and I didn’t have the words to put here for a time. But I hope to say hello a bit more often in the new year. I think it’ll be a good one.

Last year Neil and I came up with a  short playlist for celebrating Earth Day. This year I thought I’d share it with all of you!

Do you have any favorite music to listen to or play for earth day? Let me know in the comments!